How To Create Awesome Mobile Apps In Almost 50% Less Time?

How To Create Awesome Mobile Apps In Almost 50% Less Time?

How Ionic mobile app development can save you a fortune and time?
Mobile apps are ruling the world. They are fast, efficient, and can convey the business objective better. In 2017, 178 Billion apps were downloaded globally and are expected to cross 258 Billion by the end of 2022.
People are consuming a lot of content and data on their mobile phones. Hence, mobile internet is gaining its pace while desktops are losing. Seeing the 8 years trend between 2008 and 2016, desktop internet usage hasn’t moved from its place while internet usage on mobile has affected drastically by 10 times.
If you are a business owner or entrepreneur, you would already be having your mobile app. Still, if you are looking to build one, we’ll show you how you can maximize your profit by building a mobile app in 50% less time.
The two most used mobile platforms, i.e. Android and iOS are equally flooded with app demands from their respective audience volume. To serve both the genre, hybrid application development is the best alternate. Though native iPhone app development and a similar one for android have their own benefits of customization, hybrid mobile apps are very easy to execute and can serve customized mobile app solutions to small and large businesses.
But, can hybrid apps actually serve you the convenience along with business? Yes, they can, and here is a list of top advantages of using hybrid mobile apps. 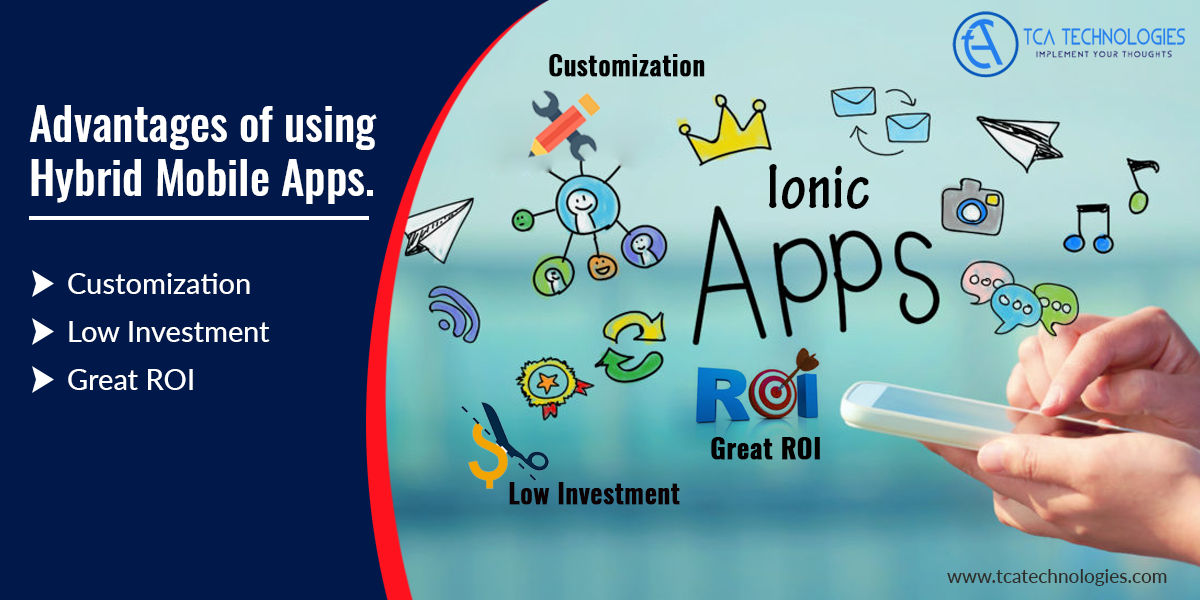 Customization -
Hybrid Apps are built to be customized. Earlier a coder had to write separate codes in iOS and Android native languages for the same app. With Hybrid Apps, a single code written in a much easier language can serve the purpose for both.
Low Investment -
As the code for a hybrid app is written once for both the platforms, you won’t require coders with specific coding languages. A person with knowledge of Javascript and HTML can easily build the app.
Great ROI -
As the customization is superior and investment is less, one can easily play on the returns part. At an effectively less cost, one can build Android and iOS apps. The cost of hybrid app development, app testing, and device testing can be saved extensively.
So how Android and iPhone app development companies in India are building great apps in almost 50% less time? Here is their secret of the best hybrid development frameworks.
Ionic Mobile App Development -
This is the most reliable way of developing a mobile app for your brand. In comparison with the native app development, the Ionic mobile app development framework allows great exposure to different operating systems. It has the ability to develop apps for Android as well as iOS.
React Native -
React Native is another great framework for custom iPhone application development and android app development. It is future-ready with rooms for operating systems other than iOS and Android. Hence, if you are planning something apart from these two OSs, you can invest in React Native Framework.
With the growing demand for mobile apps, the future will be brimmed up with millions of apps for almost every purpose.
The industry niches like E-commerce, product commissioning, blogs, service, etc will see a huge surge in the demand of mobile apps. Being an iOS and Android application development company in Noida, we have built thousands of high-quality apps with the best content practices to build this short study. We believe in keeping the complexities at bay and build highly actionable apps for all purposes.

Hello Siri to Ok Google - The Way Search is Changing